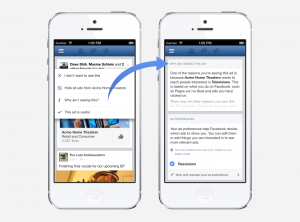 Facebook recently announced that users will be able to see WHY certain ads on Facebook are being displayed for you. This is nothing new. Google has done this for years. The difference is that Facebook has arguably more information on their users. Google makes it easy to select age, sex, geographic, and device demographics when displaying ads to properly target the “best” clicks. Facebook can do much more. In Facebook, advertisers can select combinations like: men, age 18-24 who like Big Bang Theory, Chicago Bears, and cheesecake. While that is a somewhat tongue-in-cheek example, that is how Facebook ads work.

What does this mean for Facebook advertisers? Well, while it sounds like a way for users to avoid your ads, we say – GREAT! If you don’t want to see our ads, we don’t want to pay for your clicks. In the end, if a user does not want to be targeted by your ads because of some odd page they “liked” or commented on, then they SHOULD be allowed to change their ad profile and avoid your ads. They clearly aren’t a customer you want to target and you can just focus on those that are comfortable seeing your ads.

There are a couple of extremes to consider as well. First, most people understand that nothing is free – not even Facebook (or Google). That cost is the time your eyes have to see their ads. Having said that, many – probably most people won’t ever look at why they are seeing certain ads, and if they do, they aren’t likely to change the things they like on Facebook to dodge any one particular ad.

The other extreme are the people that are just infuriated that Facebook would have the nerve to show you ads on their Facebook page (that they have paid the grand sum of NOTHING to use). These people may try to opt out of all ads they see. In the end, these people won’t click on your ads no matter what and that’s OK.

So, don’t worry about Facebook giving power back to the people so-to-speak. In the end, they are just allowing users to show your ads to an even more targeted market. Cheers to Facebook for doing something right for it’s users.